Vortex IoT announced as Factory of the Future partner

Vortex IoT announced as Factory of the Future partner

Expert engineers and scientists at Swansea University will soon be collaborating with an innovative local manufacturing company to help boost the business for many years to come.

Expert engineers and scientists at Swansea University will soon be collaborating with an innovative local manufacturing company to help boost the business for many years to come.

As part of the Factory of the Future project that’s due to be part-funded by the £1.3 billion Swansea Bay City Deal, the University’s College of Engineering has formed a new partnership with a Swansea-based firm called Vortex IoT that specialises in the production of state-of-the-art sensor technology for use in harsh environments.

Plans will see Vortex IoT collaborating with highly-skilled engineers and world class scientists at a Centre of Excellence located close to Swansea University’s Science and Innovation Bay Campus, where innovative ways to boost the company’s productivity will be researched and implemented.

It’s anticipated this activity will help Vortex IoT develop a bespoke manufacturing facility in the Swansea Bay City Region with the capacity to manufacture up to a million sensors a year for use across the world.

With a satellite office having also recently opened in Singapore, some of Vortex IoT’s work includes sensor solutions for airport gateway services, air quality monitoring, and the detection of obstructions and intrusions for rail infrastructure.

More partnerships of this kind between Swansea University and both local, established manufacturers and companies newly relocating to the City Region will be announced in coming years as part of the Factory of the Future project. 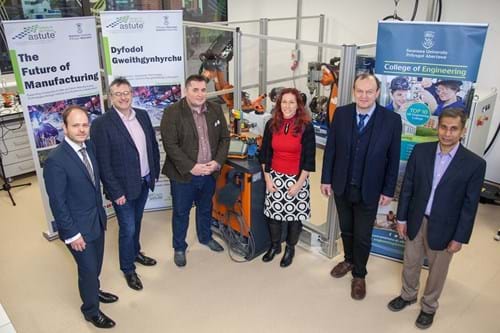 Cllr Rob Stewart, Lead Leader for the Swansea Bay City Deal, said: “This is a major step forward for the Factory of the Future project, which is one of 11 transformational projects throughout South West Wales that’s due to be part-funded by the £1.3 billion Swansea Bay City Deal.

“Manufacturing across the world is undergoing major changes due to the fourth industrial revolution – Industry 4.0 – which is being driven by continuous advancements in digital technology, so the Factory of the Future project is aimed at ensuring we keep pace with these developments in the Swansea Bay City Region. This will help future-proof the regional manufacturing sector, create highly-skilled jobs and attract further investment.

“A local success story, Vortex IoT is a perfect fit as the Factory of the Future project’s first partner.”

Founded in 2017, Vortex IoT has already created 15 highly-skilled jobs in Swansea. With customers and partners including Tata Steel, Network Rail, Dell EMC, ST Engineering, Hitachi, Welsh Water and IBM, the company has also commissioned a rapid prototyping laboratory of its own.

Professor Johann Sienz, of the College of Engineering at Swansea University, said: “Vortex IoT is an excellent addition to the Swansea Bay City Region, and we’re looking forward to a long and highly fruitful partnership. The Factory of the Future is a platform to develop, demonstrate and accelerate innovation for smart manufacturing for increased productivity and competitiveness of the manufacturing industry.

“Our early work to bring the company’s innovative products into close collaboration with the College of Engineering’s research, expertise and talent pipeline promises to facilitate development of new opportunities with other regional industrial partners, which wouldn’t otherwise be possible.”

Dave Seaton, Non-Executive Chairman of Vortex IoT, said: “The enthusiasm and support Swansea University and the Factory of the Future team are giving Vortex IoT will be an accelerant in bringing our products and solutions to life.

“Having access to world class engineers and facilities specifically focused on Industry 4.0 is an exceptional resource that’s a game changer for a young, dynamic, innovative company like Vortex IoT.

“We certainly made the right decision in establishing our business in the Swansea Bay City Region. Our whole team is now looking forward to working closely with Swansea University to accelerate the deployment of our new factory.”