Budding young engineers at an innovative Carmarthenshire school have made a tricycle for a fellow pupil with balance, mobility and learning difficulties.

Kind-hearted pupils from year six at Ysgol Gynradd Nantgaredig spent months putting the tricycle together from an Infento kit for seven-year-old Ellie Meaden, who goes to the school’s specialist speech and language unit.

From the seat to the handles and the wheels to the frame, the children made the tricycle during their breaks and in-between lessons.

Rhydian Evans, year six teacher at Ysgol Gynradd Nantgaredig, said: “The children who assembled the tricycle for Ellie deserve enormous credit because they did a lot of the work in their own time.

“It was a 76-stage assembly process, so the children showed patience as well as enthusiasm and team-working skills for the benefit of their friend.

“With many jobs due to be created by investments like the Swansea Bay City Deal, it’s vital to introduce children to subjects like practical engineering from a young age.” 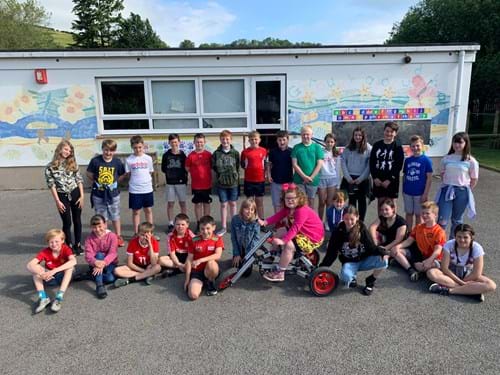 Lucy Meaden-Brown, Ellie’s mum, said: “It’s absolutely lovely that the children have done something so brilliant to support Ellie.

“She loves being outside and having a bit of freedom, so the tricycle will be fantastic for her.

“Ellie has come on in leaps and bounds at Ysgol Gynradd Nantgaredig. She goes to school happy and comes home happy, which speaks volumes for the pupils, teachers and other staff there.” 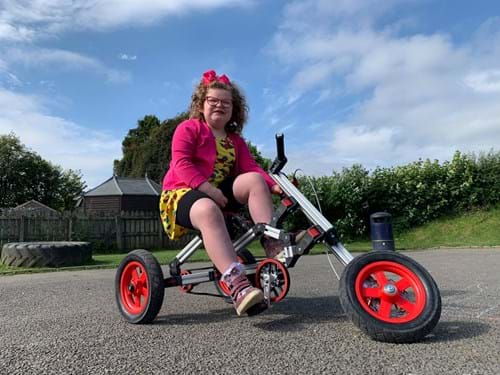 Swansea University’s College of Engineering is partnered with Ysgol Gynradd Nantgaredig as part of its STEM outreach and engagement work, which is aimed at introducing children to latest ideas in science, technology, engineering and maths.

The university assisted the school with an application for a Royal Society grant that helped cover the costs of the Infento kit. A top-up grant from Tesco was also successfully secured.

Dr Dimitris Pletsas, from Swansea University’s College of Engineering, said: “The world of engineering and manufacturing is fast-changing, with techniques like 3D printing and artificial intelligence becoming more and more commonplace.

“Integrating activities like this into the curriculum is crucial to help equip the children with the skills they’ll need to access interesting and high-paid jobs this sector will create in coming years.

“It’s very satisfying that the university is able to work so closely with this innovative school in a way that enriches the learning experiences of children there. Projects like this will help ensure our rural schools are ready to embrace the fourth industrial revolution, where traditional engineering converges with emerging digital technologies.

“The tricycle is fully adjustable, so it’ll continue to be fit for purpose as Ellie grows, with the year six pupils continuing to be its engineers when tweaks are needed in coming months and years.”

Ysgol Gynradd Nantgaredig also recently took part in a 3D printed model car race at Carmarthen Park. Along with pupils at seven other Carmarthenshire schools, the children 3D printed and assembled the model cars themselves ahead of the race.