Stars many of us will be watching and listening to this Christmas could soon be performing in Swansea’s state-of-the-art digital indoor arena.

Senior managers at the Ambassador Theatre Group (ATG), who’ll be running the arena when it’s open from mid-2021, say acts including Snow Patrol, Ronnie Wood and the Pet Shop Boys are among those who feature at their worldwide network of venues.

Others include Kelly Jones, Sinéad O’Connor and Emeli Sandé.

Main contractor the Buckingham Group has now started work on the 3,500-capacity digital indoor arena on a site adjacent to the LC in Swansea city centre.

Swansea Council is behind the arena plans, with the attraction also due to be part-funded by the £1.3 billion Swansea Bay City Deal.

The council and ATG are discussing the arena’s content to ensure it complements programmes offered by other Swansea venues, helping maintain the provision of high-quality entertainment for diverse audiences. 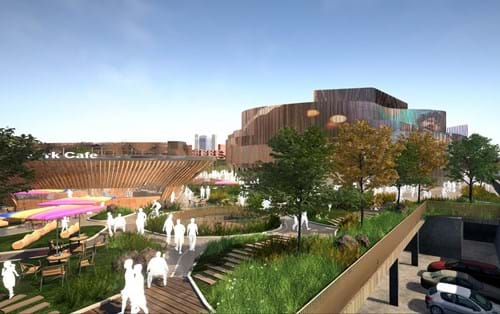 Katy Arnander, ATG’s Content Development Director, said: “We’re very excited to add Swansea to our portfolio of venues. The arena is both a great scale and well-positioned to attract some exciting performers.

“We currently operate 31 venues across the UK, and every year present many household names in music and comedy.

“As an international organisation, with more venues in the US and Germany, we also work with promoters across our network which gives us access to some of the biggest stars.”

Claire Dixon, ATG’s UK Business Manager, said: “This is an incredibly exciting opportunity for us.

“The multi-purpose indoor arena in Swansea will have excellent facilities for music, entertainment, sporting events and exhibitions, but we’re also looking to attract major digital events like conferences, e-gaming and product launches.

“The arena will be capable of delivering a conference-style event for up to 750 people in a temporarily constructed ‘theatre’ auditorium within the upper tier. And in addition to the plenary auditorium, the arena will also provide associated meeting rooms and breakout spaces, all designed with flexibility in mind.”

Cllr Rob Stewart, Swansea Council Leader and Chairman of the Swansea Bay City Deal’s Joint Committee, said: “These are exciting times for Swansea. Attractions like the arena form part of broader plans to breathe new life into the city centre, which will benefit existing traders, create top quality spaces for start-ups and growing businesses, and generate well-paid jobs and opportunities for local people.

“Developments of this kind will also act as a catalyst for further economic growth, with the number of cranes now towering above the city showing that the private sector is investing in Swansea in way it hasn’t done for many years.”

Also forming part of the Swansea City and Waterfront Digital District City Deal project is a digital square outside the arena, a digital village on Kingsway for tech and digitally focussed businesses, and a box village and innovation precinct for start-up companies at the University of Wales Trinity Saint David SA1.

The arena also forms part of the Swansea Central regeneration scheme being led by Swansea Council. Phase two of Swansea Central will include a new public sector hub, along with new shops, restaurants and other developments.

The Swansea Bay City Deal is a £1.3 billion investment in a programme of transformational projects across the Swansea Bay City Region, which is made up of Carmarthenshire, Neath Port Talbot, Pembrokeshire and Swansea. The City Deal – being funded by the UK Government, the Welsh Government, the public sector and the private sector – is being led by Carmarthenshire Council, Neath Port Talbot Council, Pembrokeshire Council and Swansea Council, in partnership with Swansea University, the University of Wales Trinity Saint David, Swansea Bay University Heath Board and Hywel Dda University Health Board.

The City Deal is worth £1.8 billion and more than 9,000 high-value jobs to the regional economy in coming years.