Leaders in South West Wales say the £1.3 billion Swansea Bay City Deal has a key role to play at the heart of the region’s economic recovery from Covid-19.

Worth £1.8 billion and more than 9,000 high-quality jobs to the Swansea Bay City Region in coming years, the City Deal will part-fund a programme of major projects across Carmarthenshire, Neath Port Talbot, Pembrokeshire and Swansea.

The first £18 million of City Deal funding has already been released by the Welsh Government and UK Government, based on the approval of two City Deal projects – the Canolfan S4C Yr Egin creative and digital hub in Carmarthen, and the Swansea City and Waterfront Digital District.

Major progress is also being made on meeting of number of government terms and City Deal review recommendations, which will help secure a further £18 million this year.

Other City Deal projects include a pan-region Digital Infrastructure project that will boost digital connectivity in rural and urban communities. A life science and well-being development earmarked for Llanelli is also planned, along with a life science campuses project.

“The new normal also gives the chance to further grow the region’s foundational economy, while encouraging more remote working and the use of alternative, sustainable forms of transport which will combine to benefit the environment.”

Ed Tomp, Chairman of the Swansea Bay City Deal’s private sector Economic Strategy Board, said: “City Deal investment is much-needed as a driver to boost regional economic recovery in the wake of Covid-19.

“This is hugely important because it will generate a brighter future for our businesses and residents, while creating a stronger, more vibrant City Region where our young talent can stay to pursue their career and life goals.”

The City Deal’s energy projects include the Pembroke Dock Marine project that’s set to place Pembrokeshire and the City Region at the forefront of global marine energy innovation. A regional Homes as Power Stations project is planned to tackle fuel poverty, while helping the region meet its carbon reduction targets.

In Neath Port Talbot, the Supporting Innovation and Low Carbon Growth programme of projects is focusing on decarbonisation and future-proofing the steelmaking sector through the creation of a steel innovation centre.

A regional Skills and Talent initiative is also in the pipeline to enable local people to access jobs being generated by City Deal projects.

“Adhering to all social distancing guidelines, contractors have also been continuing work on the indoor arena site forming part of the Swansea City and Waterfront Digital District project as the steel structure of the new attraction starts to take shape. 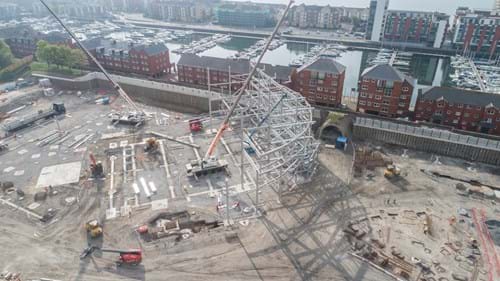 “Despite the unprecedented challenge of Covid-19, this is among the progress that should reassure regional businesses and residents that partners remain absolutely focused on delivering the City Deal as soon as possible.”

Major energy boost in pipeline for thousands of homes