Major plans to boost digital connectivity for businesses and residents throughout South West Wales are picking up speed.

Gareth Jones, from Carmarthen, has been appointed manager of the Swansea Bay City Deal’s Digital Infrastructure project, which will be rolled out across Carmarthenshire, Neath Port Talbot, Pembrokeshire and Swansea.

The £55 million project is made up of three elements:

Carmarthenshire Council – where Gareth has worked since 2005 – is leading the Digital Infrastructure project, which will also support all other City Deal developments.

Having most recently been the council’s Digital Transformation Manager, 38-year-old Gareth says his new role gives the chance to contribute to the economic transformation of the entire Swansea Bay City Region.

“Digital connectivity is beginning to underpin everything we do, so this is a chance for the City Region to get ahead of the curve by introducing high-quality digital infrastructure that will significantly benefit all residents and businesses in coming years, while also helping attract even more investment and jobs. 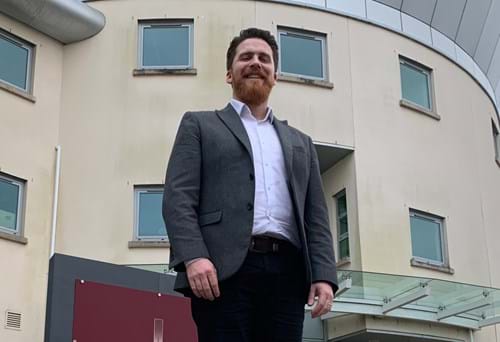 “World class digital infrastructure is planned for urban areas and key economic growth zones identified by the four regional local authorities to further support businesses, enterprise and entrepreneurship. The rural theme of the project will improve digital connections for our underserved and rural communities.

“The provision of advanced network technology and infrastructure along the primary transport corridor of the region will support businesses close to these vital communications links, while also potentially leading to ‘smart roads’ that will use digital technology to make driving safer, greener and more efficient.”

The use cases for cutting-edge digital infrastructure are endless, says Gareth.

He said: “World class digital connectivity can benefit so many sectors – whether it’s technology that will enable ‘smart’ cities and towns, 21st century farming, virtual reality in healthcare to monitor patients, or the ability to control heat, lighting and security devices at your home or workplace when you’re not there.

“Many families nowadays would struggle without use of 21st century connectivity, but that’s going to become more and more the case in coming years as digital technologies continue to evolve and public services are delivered digitally.

“This project will future-proof the Swansea Bay City Region’s digital infrastructure, ensuring all our communities – both rural and urban - are as well-placed as possible to benefit from further technological innovation that will doubtless unfold in the near future.”

Subject to approval at regional Local Authorities and Joint Committee, the project’s business case will then be submitted to the Welsh Government and UK Government for final sign-off.

The investment programme is worth £1.8 billion and more than 9,000 well-paid jobs to the City Region.