Entire City Deal portfolio approved and in delivery, celebrated with a Showcase Event to mark this milestone

Entire City Deal portfolio approved and in delivery, celebrated with a Showcase Event to mark this milestone

The Swansea Bay City Deal has achieved a monumental milestone, with all nine transformational projects and programmes approved by the UK Government and Welsh Government.

The Swansea Bay City Deal has achieved a monumental milestone, with all nine transformational projects and programmes approved by the UK Government and Welsh Government. The focus of the portfolio - estimated to attract £1.3 billion of investment by 2033 – now moves to the delivery phase, and will provide opportunities for many businesses and residents across South West Wales, in addition to boosting the region’s economic recovery.

A celebratory Showcase Event took place at Parc Y Scarlets to highlight this outstanding achievement and members from the public, education, health and private sectors were invited to attend. In addition to praising the remarkable efforts from the project partners that have been part of the journey so far, it was also a chance network and look ahead at the future opportunities that have now been unlocked.

Created to transform and regenerate South West Wales, the City Deal is an unprecedented investment funded by both governments, the public sector, and the private sector, who will work collaboratively to delivery nine outstanding projects. Worth over £1.8 billion to the regional economy the Swansea Bay City Deal will improve people’s lives in both rural and urban areas across the region by raising aspirations, creating over 9,000 well-paid jobs, improving services and boosting skills. Buildings will be constructed that will support businesses to incubate and grow, and supply chain opportunities will be developed.

Set to align with three core themes – economic acceleration, energy and smart manufacturing, and life science and wellbeing - the Swansea Bay City Deal has already seen significant progress through several of its projects. The opening of Yr Egin, a creative sector hub led by the University of Wales Trinity Saint David in Carmarthen; the Swansea city centre developments through the opening of Swansea Arena; and the construction of the Bay Technology Centre in Port Talbot. These developments are starting to create long-lasting partnerships with key companies such as S4C in Yr Egin and the Ambassador Theatre Group who run Swansea Arena, and many more to come in the future.

There is also progress in other areas of the City Deal as contractors have been appointed to begin the multi-million-pound Pentre Awel project in Llanelli, the high profile 71/72 Kingsway office development in Swansea and the historic hangar refurbishments at the Port of Milford Haven. These and many other procurements will take place for the City Deal in coming months, providing opportunities for regional businesses, and delivering thousands of jobs, as they move through the construction phase into operation.

The three regional projects, Skills and Talent, Digital Infrastructure and Homes as Power Stations, are also underway - providing skills to meet future workforce requirements, supporting a thriving digital economy, and facilitating the adoption of energy efficient design and renewable technologies into homes across the City Region.

The Swansea University’s Campuses project was the final to be approved by both governments which will promote innovation and business growth in the expanding Medical Technology and Sports Technology sectors. The City Deal is now looking to embrace opportunities with partners across the entire portfolio, which will make an instant difference to our region as well as build a legacy for future generations.

Councillor Rob Stewart, Chairman of the Swansea Bay City Deal’s Joint Committee, said “Progress of the City Deal over the last 12 months has been fantastic and we now see ourselves in a unique position that all of our projects and programmes have been approved. The Swansea Bay City Deal is the first region in Wales to be identified with all headline projects and programmes in the delivery phase, which truly shows the ambition that we have in growing and accelerating the economy of South West Wales.

“It was fantastic to meet with so many businesses and partners during the Showcase Event that share our vision and who will work collaboratively to make the entire City Deal portfolio a success, brining highly skilled jobs, infrastructure and growth to the region.”

Adrian Sutton, Managing Director Vortex, part of Marston Holdings who attended the Showcase Event said, “The progress made by the Swansea Bay City Deal in the past year is truly inspiring, all projects have made significant advancement and this is to be applauded given the difficult economic and social climate of recent times. The buzz at the event was palpable and the Leaders of each respective Council and political partners did well to convey that the future is bright and direction of travel is onwards for the region.”

Huw Bala, Project Manager at Tinopolis added “An enjoyable and very informative conference one which showed such a variety of projects in particular Pembroke Dock Marines’ green energy and engineering, Homes as Power Stations which could be invaluable in future energy generation and the Digital Infrastructure which is vital South Wales technology development.”

Nick Gorvett Partnerships Manager at 2B Enterprising who also attended added “What a great turnout for the Swansea Bay City Deal event. It was fantastic to hear about the various projects across the region and we are looking forward to the future.”

Sharon Adams Commercial Manager at the Port of Milford Haven said “Attending the City Deal Showcase Event was a fantastic opportunity to catch up on the excellent progress made on the deal so far and it’s great to hear that all of the projects have now been approved. I’m looking forward to seeing the plans come into reality and the growth and regeneration it will bring to the region.”

Russell Greenslade from Swansea Business Improvement District (BID) added “It was great to be at the Swansea Bay City Deal showcase event. Excellent to hear that the funding has now been allocated, and all nine projects have now been approved. We are proud to be part of these projects driving economic development and growth.” 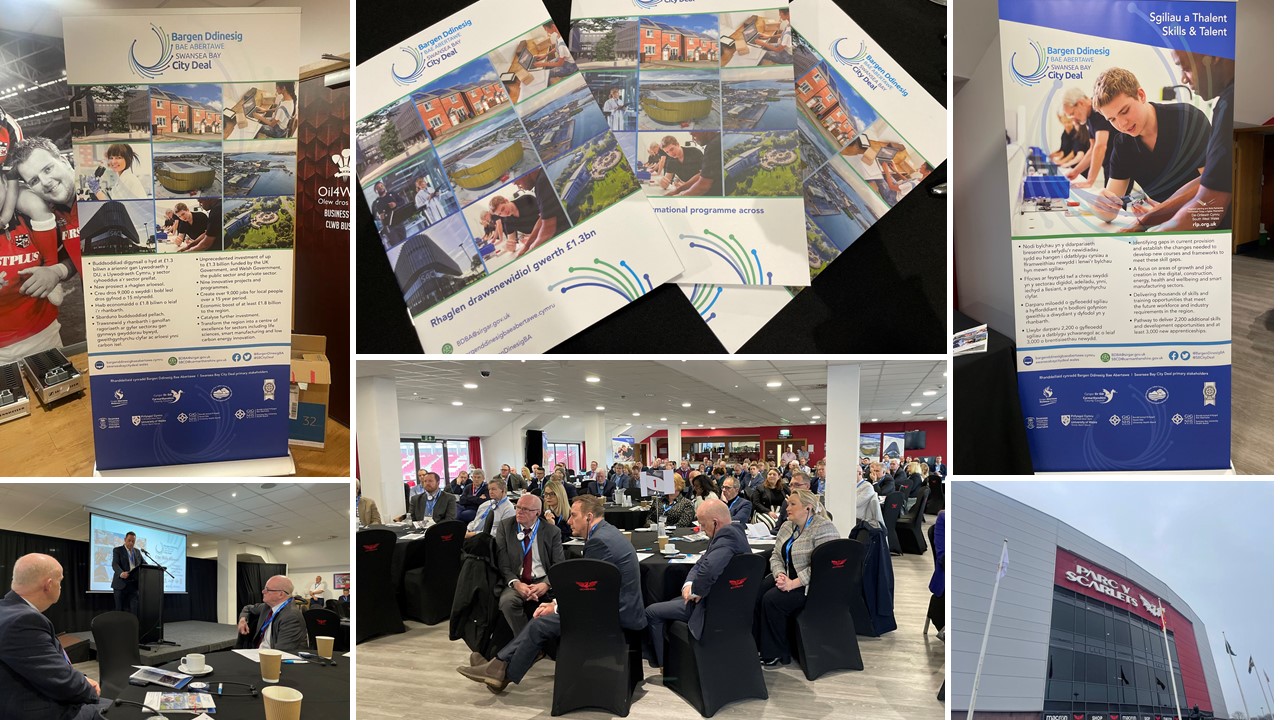