Innovative plans for a ground-breaking building allowing exciting young tech and creative businesses to grow have been unveiled for Swansea city centre.

They show a glass-fronted structure rising six stories on the site of The Kingsway's former Oceana nightclub. More than 600 people could work there.

The development is due to be part-funded by the Swansea Bay City Deal as part of the Swansea City and Waterfront Digital District project that will also feature an indoor arena at a site adjacent to the LC, along with a box village and innovation precinct at the University of Wales Trinity Saint David SA1.

Other greenery, including a green roof, also form part of the plans for the building, as well as a new link between Oxford Street and The Kingsway.

The building will be high-tech and eco-friendly, with flexible open-plan work spaces including balconies overlooking the city centre.

Cllr Rob Stewart, Chairman of the Swansea Bay City Deal’s Joint Committee, said: “This development will cater for new and existing digital businesses, bringing them together in an ultra-modern flexible workspace environment, generating new jobs and vitality for the city centre.

"We're talking to potential occupiers already and are confident of demand.

"We’d like to thank the public and businesses for their input so far - and ask them to give us feedback on the new plans that they've already greatly influenced."

The public now has the chance to comment on the plans through an early-stage planning application process known as a pre-application consultation.

Feedback can be made here until Friday February 21.

Once more public feedback has been taken into account, a full planning application will be made.

If planning permission is granted, construction could start early next year with the building opening in late 2022. 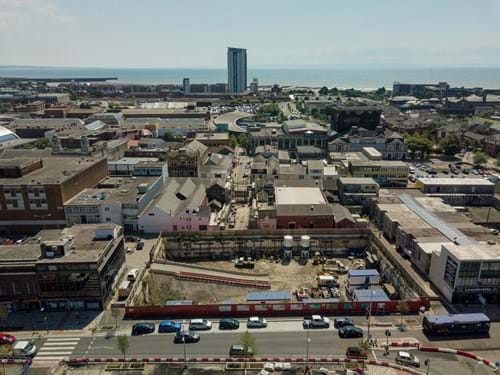 The team helping Swansea Council to deliver the project includes WSP, Arch00, Gleeds, The Urbanists, and Cushman and Wakefield.

The first £18 million of City Deal funding has now been released by the UK Government and Welsh Government, based on the approval of two projects including the Swansea City and Waterfront Digital District.