The programme will help establish the Swansea Bay City Region as a leader in low carbon growth and the green economy. Close collaboration with industry, government and academia is key to its success by delivering low carbon, sustainable and inclusive economic growth through creating the right environment to develop new technologies from the research stage, through to production, to support job creation in the region.

Led by Neath Port Talbot Council with Swansea University and University of South Wales as delivery partners, this programme aims to support the creation and safeguarding of 1,320 jobs in the green economy through seven interlinked projects that will enhance infrastructure, research and development and commercialisation:

The programme can commence drawing down on a £47.7 million City Deal investment from both governments to complement the £5.5 million already committed from the European Regional Development Fund through the Welsh Government and Neath Port Talbot Council and a further £5.5 million of private sector funding. The programme also aims to attract a further estimated £40 million of additional funds from the private and public sectors over the next 5 years.

The funding will provide solutions to decarbonise commercial and industrial buildings, transport and industrial processes that will support the policies and strategies laid out by the Welsh and UK governments.

James Davies, Industry Wales, said “The programme of projects aims to transform industry and support the green industrial revolution. The focus on Research, Development and Innovation into energy and advanced materials fits well with the government’s agenda to decarbonise and with other initiatives such as the South Wales Industrial Cluster (SWIC). Industry Wales strongly advocates this ambitious and progressive programme of work that can help bring back and sustain green manufacturing in South West Wales through support for Start-ups, Small to Medium Enterprises and attract inward investment from outside the region.”

Welsh Government Economy Minister, Vaughan Gething said: “As we emerge from the Covid crisis, we are determined to move Wales forward with an economic recovery designed to tackle the climate emergency head on. We will help businesses transition to a low carbon future that will deliver with a stronger, fairer and greener economy.”

Wales Office Minister, David TC Davies, said “This multi-million pound deal is vital to create jobs and prosperity across a large part of South Wales. When I visited in July I was hugely impressed with the projects that are driving the move to a low carbon, modern economy in Wales, fit for the 21st century. I’m delighted that the UK government’s investment will support this growth.”

Chair of the Swansea Bay City Deal Joint Committee, Cllr Rob Stewart said: “I very much welcome the approval of this programme which means we now have more projects and programmes approved, and either in delivery or ready for delivery than any other city or growth deal in Wales. I want to pay tribute to the excellent work being done to ensure we deliver the city deal for South West Wales.” 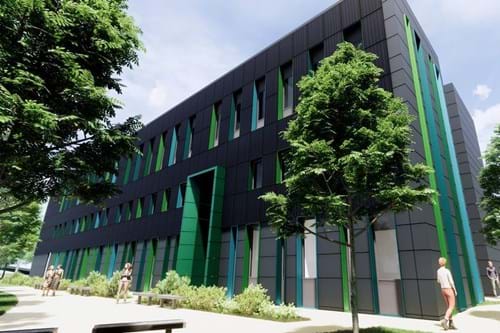 The Swansea Bay City Deal is an investment of up to £1.3 billion in a portfolio of nine major programmes and projects across the Swansea Bay City Region, which are together worth over £1.8 billion and 9,000 jobs to the region’s economy in coming years.

The £8.5m Bay Technology Centre has been awarded £3.69m of EU funds from the European Regional Development Fund (ERDF) through the Welsh Government.

The project involves creating a 2,500m2 hybrid building. This will provide a range of flexible office space to support both start up and business growth companies, with a focus on the innovation and R&D sectors.

This is one of a number of projects within the Swansea Bay City Deal supported by the European Regional Development Fund including £14.9m EU funds awarded to four projects assisting the further development of the marine energy industry in Wales through the Pembroke Dock Marine programme:

“The Swansea Bay City Deal will drive economic growth in the region with an Innovation and Low Carbon Growth programme that boosts our green aspirations.”