The plans form part of a Homes as Power Stations project led by Neath Port Talbot Council that’s due to be part-funded by the Swansea Bay City Deal.

Under the plans, the retro-fitting of 7,500 homes will complement 3,500 new builds over a five-year period throughout Neath Port Talbot, Swansea, Carmarthenshire and Pembrokeshire.

The pan-region Homes as Power Stations project is seeking £15 million from the Swansea Bay City Deal, which is due to be funded by the UK Government, the Welsh Government, the public sector and the private sector.

In the wake of a positive meeting about the project earlier this summer, a follow-on Homes as Power Stations workshop between project leaders and representatives from both governments will be held later this month (September 2019).

This, it’s hoped, will help enable approval for the City Deal funding as soon as possible.

Cllr Rob Jones, Leader of Neath Port Talbot Council, said: “This is a fantastic project that will create jobs and boost regional supply chain businesses, while tackling fuel poverty and meeting the need for more housing.

“A business case for the project is with the UK and Welsh Governments for approval, with positive on-going discussions suggesting we’re now close to sign-off.

“Once the City Deal funding is in place, a dedicated Homes as Power Stations project team will focus on delivery over a five-year period, helping raise the Swansea Bay City Region’s profile as an example of best practice for this kind of innovation.”

A pipeline of housing schemes with energy-efficient technology at their heart is already under way in many parts of South West Wales, Cllr Jones said.

These include a 16-house Active Homes project on Wenham Place in Neath that’s being delivered by Pobl Group in partnership with Neath Port Talbot Council and Swansea University’s SPECIFIC Innovation & Knowledge Centre based at Baglan Energy Park. 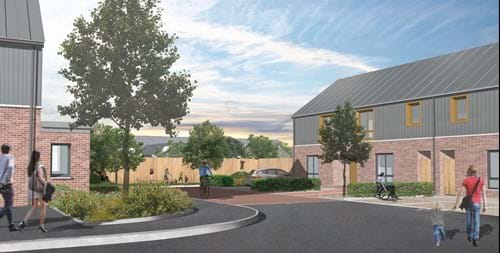 Other regional schemes include an energy-efficient housing development in the Penlan area of Swansea where council tenants benefit from energy bills of under £100 a year, with construction of a second phase now on-going in Birchgrove.

Planning is also well under way for locally constructed, eco-friendly developments in Carmarthenshire and Pembrokeshire that will reduce energy costs by using the power of the sun, building on schemes already in place.

Cllr Jones said: “There’s already some great work either completed or on-going at many sites throughout the region. These schemes will inform the specification of the Homes as Power Stations developments in coming years as we look to pick the best energy-efficient models.

“The project will be working closely alongside the public sector, the private sector and registered social landlords to construct on a scale that will drive down costs, while eventually enabling energy positive homes that will boost people’s health and well-being.

“Regional housebuilding has an exciting future in store, thanks to projects of this nature.”

Made up of transformational projects across South West Wales, the Swansea Bay City Deal is projected to be worth £1.8 billion and over 9,000 well-paid jobs to the regional economy. The investment programme is being led by Carmarthenshire Council, Swansea Council, Neath Port Talbot Council and Pembrokeshire Council, in partnership with Swansea University, the University of Wales Trinity Saint David, Swansea Bay University Health Board and Hywel Dda University Health Board.