Work back underway to set scene for digital village

Work back underway to set scene for digital village

An investment programme that will transform Kingsway in Swansea city centre is back underway.

An investment programme that will transform Kingsway in Swansea city centre is back underway.

Construction work on the £12 million project has now restarted on site, following a break over Christmas and the early New Year to help traders and shoppers.

Kingsway is being transformed into a city park as part of a Swansea Council scheme that will include new public areas, more green spaces, more street trees and improved routes for pedestrians and cyclists.

The existing two-lane, one-way vehicle route will also become two-way on both Kingsway and Orchard Street later in 2019.

Shops and other premises will remain open and accessible throughout the improvement works.

A 100,000 square foot digital village for tech businesses is among the new features planned for Kingsway. 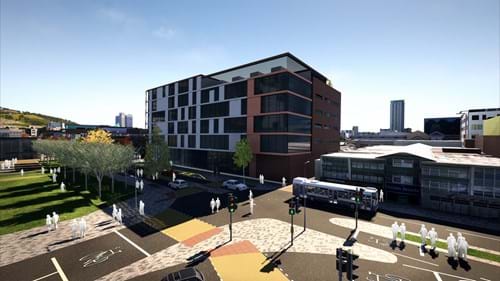 Due to be part-funded by the £1.3 billion Swansea Bay City Deal, the digital village is being proposed for the former Oceana nightclub site. Meeting the need for more high-quality business spaces in the City Region, the facility will also help retain regional talent while generating more footfall and spending in Swansea city centre.

Cllr Rob Stewart, Swansea Bay City Deal Leader, said: “The Kingsway's transformation into a people-friendly destination will pave the way for the creation of hundreds of jobs and a green artery for the city. It's the first step in the regeneration of the city that will benefit generations to come."

A ‘pocket park’ at the top of Princess Way is among the features planned for Kingsway, with around 200 new trees being planted as part of the overall project.

Other regeneration projects in Swansea include a 3,500-seat digital indoor arena on the LC car park site, which is also due to be part-funded by the Swansea Bay City Deal.

An investment in 11 major projects across the Swansea Bay City Region, the City Deal is due to be funded, subject to the approval of business cases, by the UK Government, the Welsh Government, the public sector and the private sector.